The artistic interest of Betty Bowman Thomas span a range of art disciplines. From the traditional arts of painting, crafts, sewing, photography, and writings that include poetry,  songs, and novels. Betty Bowman Thomas was born in Natchez, Ms. And moved six months later to the West Monroe, Louisiana area.  Betty’s mother shared her talents in paint by number at an early age which sparked an interest in taking Art in High School. Four years of art in West Monroe High School provided several types of art projects but she favored painting in oils. Married with 2 sons and 4 grandchildren. Her mother’s talent of sewing would help provide a way for Betty to make her own clothing and those of her family. In 1991 while working at a local Beauty shop, her customers started calling her the singing beautician. One of the employee’s there sang at the Dixie Jamboree once a month and ask Betty if she would be interested in auditioning. Betty started singing once a month, local fairs, festivals, and a local Christian channel. Later this would provide a way to let her mother hear Betty sing. Her mother had a terminal illness and the next one and a half years, Betty would devote as much time to let her mother live until she died. Not long after her mother’s death Betty began to paint again. Painting in oils, Spiritual, attempts at landscapes and portraits. Then she wrote a novel of her mother’s trails and tribulations of her life and how Betty was a part of this. During her mother’s struggles Betty always kept positive and during this time Betty became a Christian. Within a year Betty’s life would take another new direction of raising her granddaughter. The next few years with her father, Betty would continue her writings as well as her father did. After her father’s death she continued to write two other novels using fiction, non-fiction, and fantasy. She got to find out that she had true roots of a Southern Lady. She joined a patriotic society where she entered some of her writings and got State recognition. Betty also had the opportunity to hostess for one of the local Antebellum homes and wear an antebellum dress. This was exciting for her to know what it was like for a brief time to step back in time. Her granddaughter got to share this with her and this sparked the interest in Photography. Then in 2013 Betty’s paintings rose to another level of painting. During the past few years of her own trail and tribulations she grew closer to the Lord and allowed her feelings to come out in these new paintings. She tried acrylic and started a series of Biblical paintings. The first was the Transfiguation of Jesus Christ using scripture to follow what she thought might have taken place that day. Next was a dream or vision in her mind of what Heaven might look like. She had dreamed this as far back as a young child. Then a sunset painting and two landscape painting. Betty is now working on other Biblical paintings and other paintings of the West Monroe, Louisiana area. West Monroe is her home town but still is very fond of her Mississippi roots. Her talents continue to grow as learning from the country folk about cooking, canning, hunting and preparing Louisiana French country style cooking. Recently, she has started painting different areas of the United States and other countries from photographs taken from friends or family. 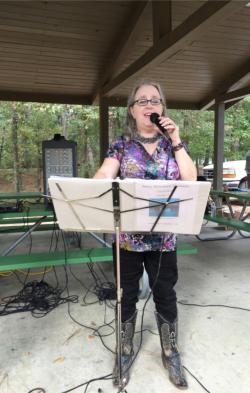 Singing and song writing  are just two of Betty's interests. Her favorite music is Gospel.